Get a full bottle, this will take a while. In fact, we probably need an intermission.

Went out as sole customer with Del from Fine Feather Friend Tours. He turned out to be a birdspotting genius, as well as knowing more about the impact on far north Queensland of WWII than I could even dream at.

Was a full day tour, and I could not recommend Del more highly. He not only knew the south Daintree area intimately, he spotted so many of those irritating little brown birds and at a glance got the species and usually the gender.

I will stick largely to those new ones, although there were a couple of highlights with species already seen. 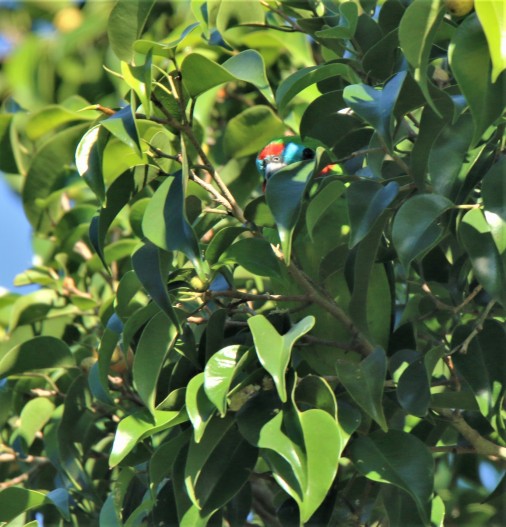 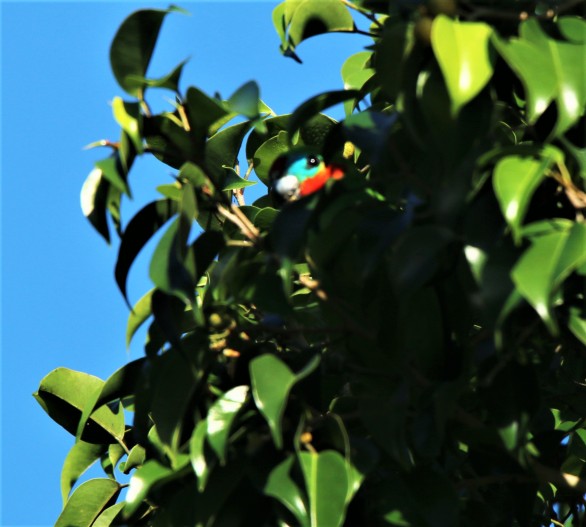 This shy chap is an adult male, rather exotically named, Double-Eyed Fig-Parrot. The race is McLeay’s (he has a few birds up here named after him), being found in a small area on the east coast just around Cooktown to Cairns. The male has the red at the base of the cheek. There are two other small populations, one on the south Qld coast, and one in far north Queensland coast.

The Helmeted Friar bird (race yorki) is unique to the Qld coast from Gympie to the top of the Cape. There are two other small populations at the top of the Northern Territory.

The White-Breasted Woodswallow, the largest of the the family, is found over the eastern half of Australia, but would be on the northern-most edge of its habitat around here.

Picking Kingfishers apart can get tricky, this one being the Sacred Kingfisher, found over most of the country except for the middle desert areas and Tasmania doesn’t like the crossing apparently.

We saw male and female Olive-backed Sunbirds in a couple of places, one with a precarious nest hanging from an electrical cable. The male and female both go out to search for a suitable nesting site. 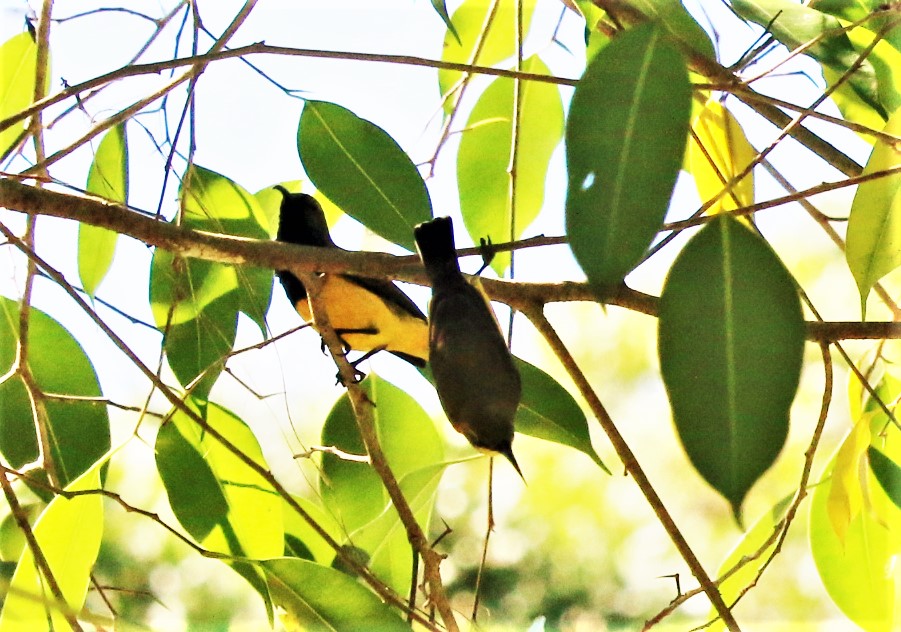 The male has the black flashing on the throat. The female below is in the precarious nest and the male was catching insects off the ground lights. 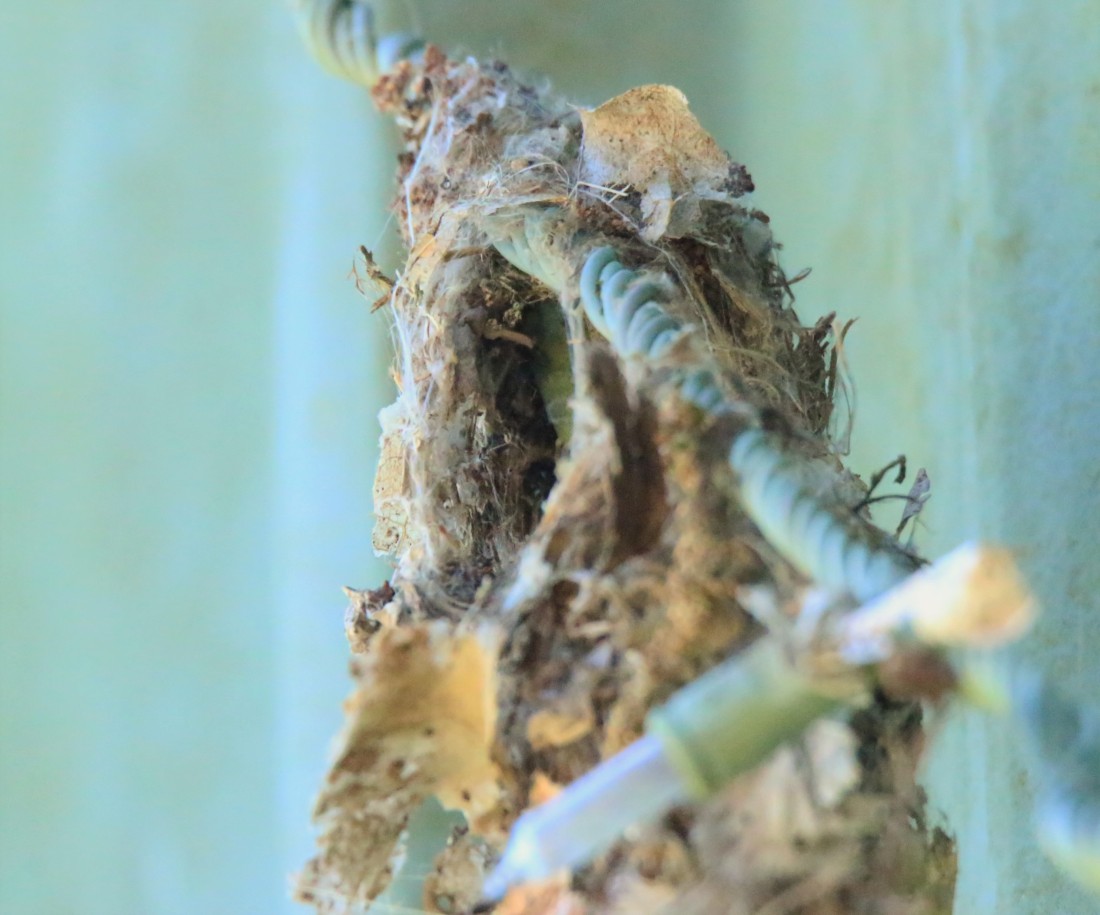 Other birds on the rivers included the Radjah Shelduck, which apparently not being able to read, were wandering around oblivious to their carnivorous and nefarious neighbours. They are found only on the northern coastlines.

Another precarious nest had been built by a White-breasted Cuckoo-Shrike above a car park. 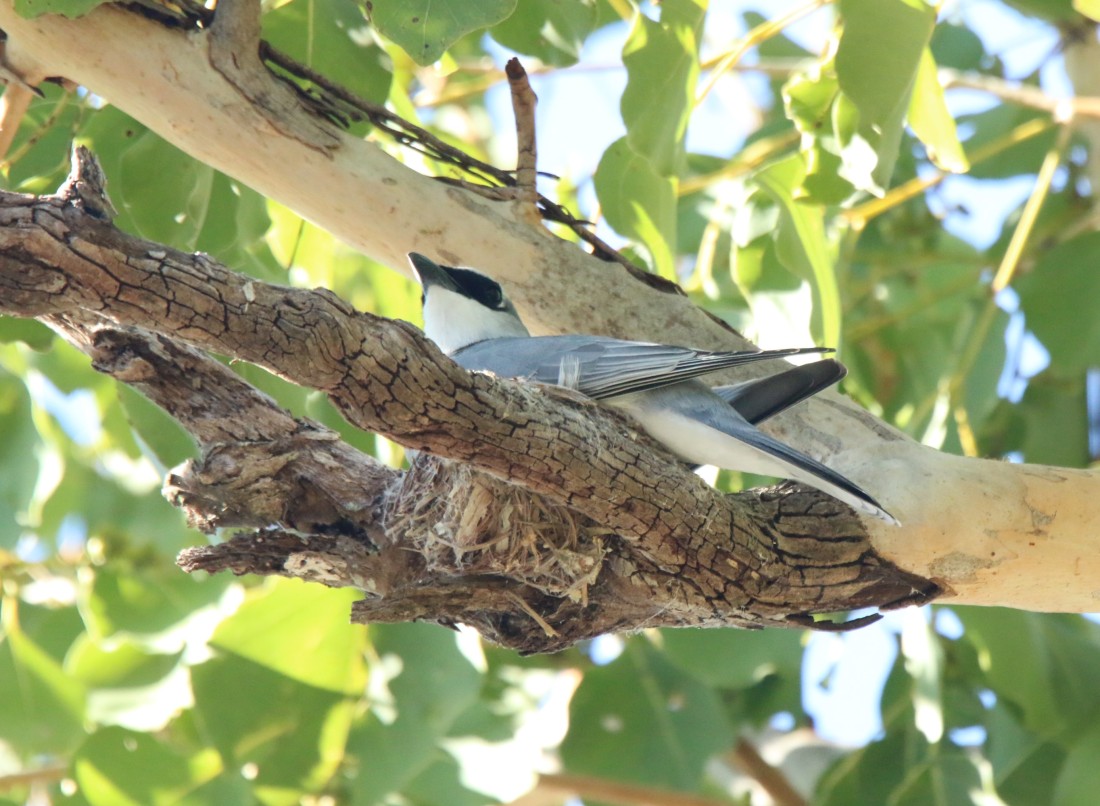 The Australian (Richard’s) Pipit is found all over the continent, including a race in Tasmania. This is an adult race australis, on the northern edge of its range.

Given it is sugar cane country, Black Kites were ubiquitous.  I have seen plenty of these in other parts of northern Australia. The key to telling the Black from the Whistling kite, is that the Black Kite has a bit missing at the end of its tail (a bit concave), and the Whistling has a whole tail.

The Great Egret is a noble beast, significantly bigger than other Egrets, and with three fused plates at the base of the neck, to stop its neck falling off with the weight.

One of the small birds I might well have missed unassisted was the Leaden Fly-catcher. This is a male.

A sighting with gold stars is the rarely seen Rose-crowned Fruit-Dove. It was down on the coast, its habitat actually extending along the coast from Sydney across to Broome; a striking looking bird.

My guide was right up with the preferred bushes for honeyeaters, and I saw half a dozen new species.

In order first, we have the Graceful, McLeay’s, Dusky, Yellow, and White-throated. 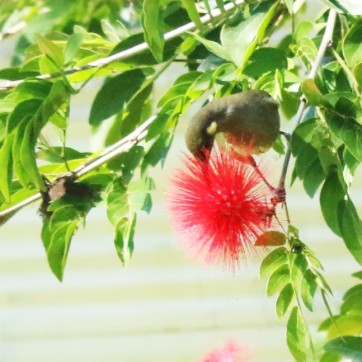 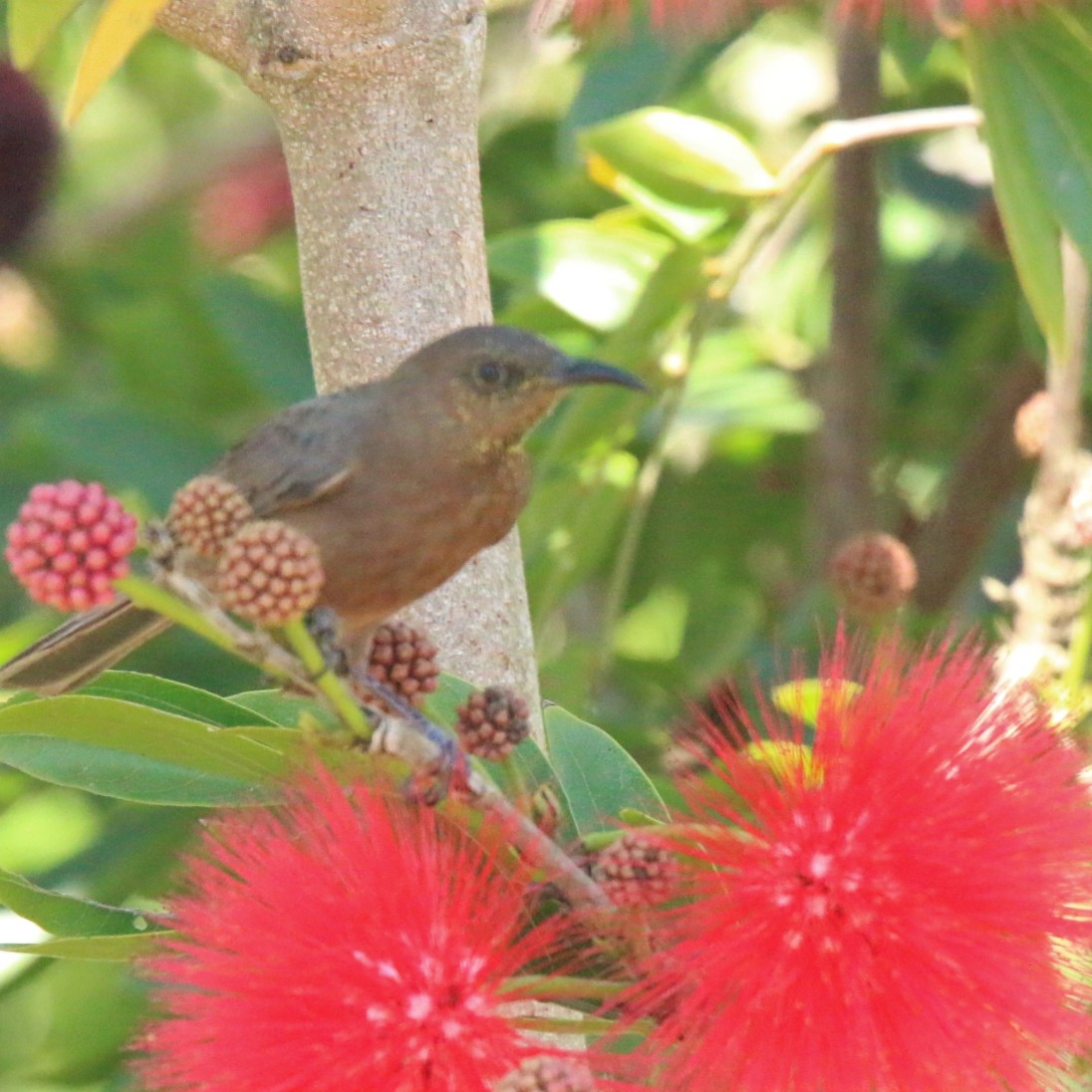 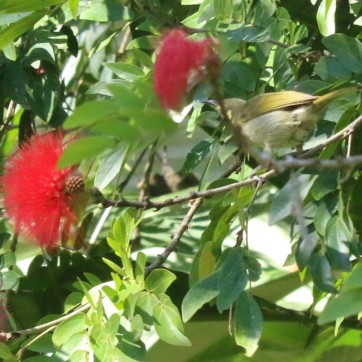 Another new one was the Bridled Honeyeater. Their behaviour was fascinating. They were lying spread out with wings raised on bare dirt in the sunshine. The state of the pieces of dirt showed that this was a much repeated activity in the same spots. 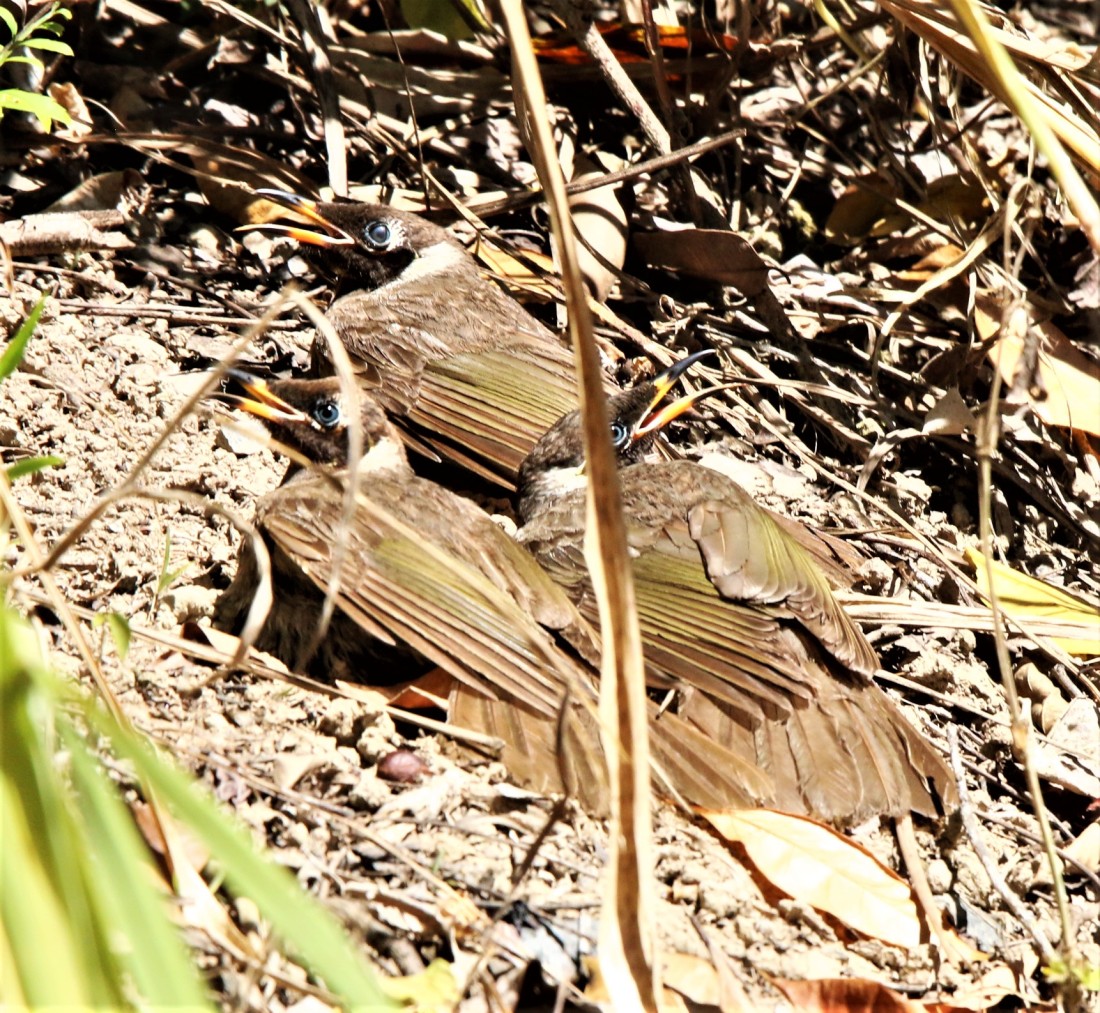 Even more remarkably, Lewin’s Honeyeaters and Bridled Honeyeaters were lying side by side, snuggled up in the sunshine.

There were also many Blue-faced Honeyeaters, very common around Townsville as well.

We saw several nests including another precarious one – that of the imaginatively named Big-billed Gerigone – and also the Varied Triller, the Great Brown Babbler and the Blue-faced Honeyeater.

Youi will see how this nest, hanging from a piece of coathanger, has the entrance cunningly protected with the shielded entrance from below making it much harder for snakes to get in from above. 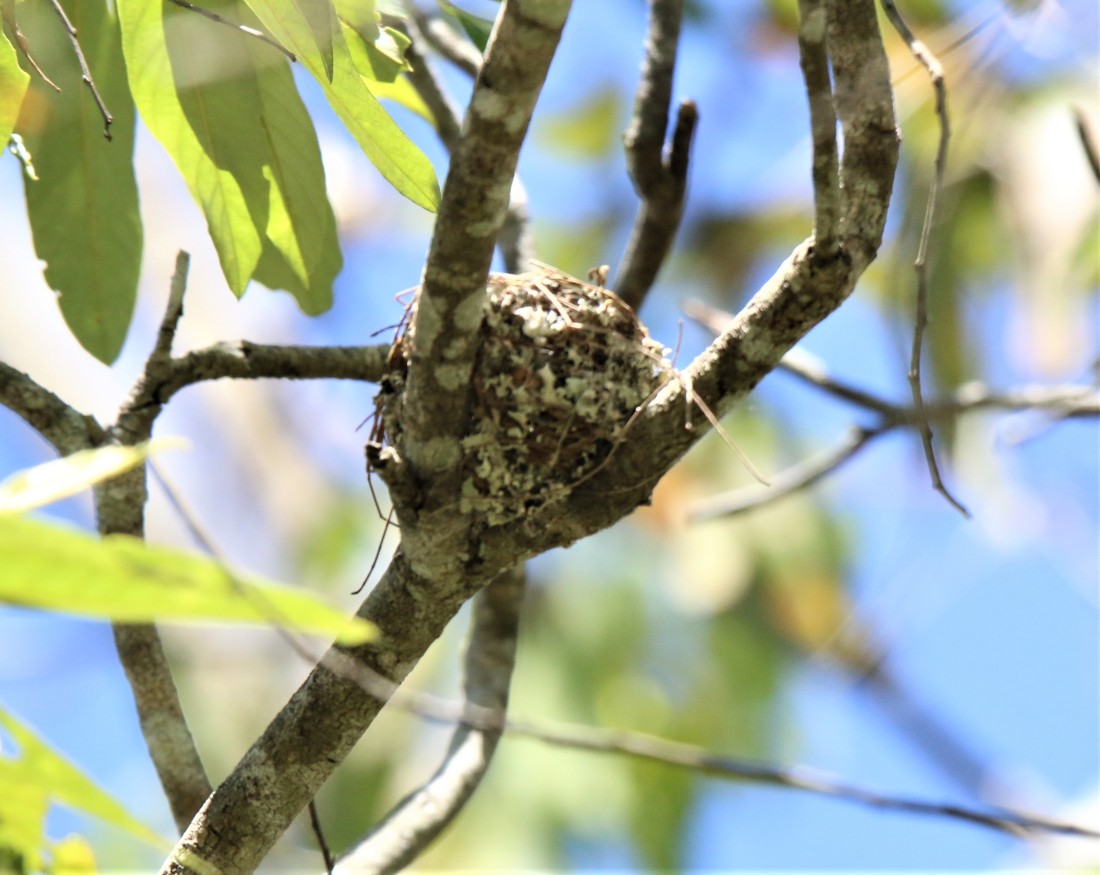 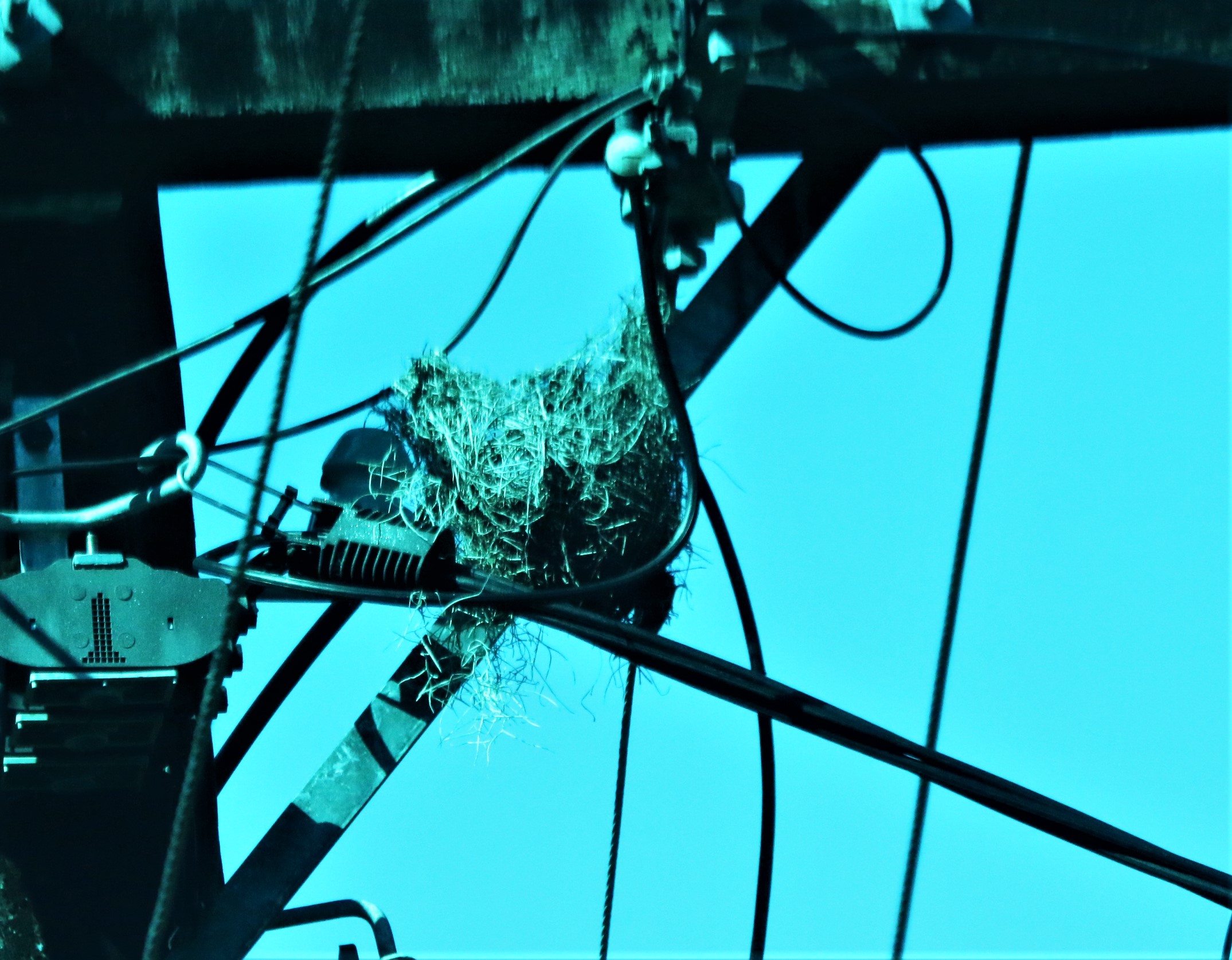 The latter is particularly clever. Although it is hard to imagine a more dangerous place than right in the middle of high voltage electrical cabling and resistors, the tree ants which eat the eggs are apparently reluctant to carry the epithet, “tree and electrical cabling ants”, and stick to the trees.

Under some large trees having a cuppa, I managed to snap a wide range of birds. 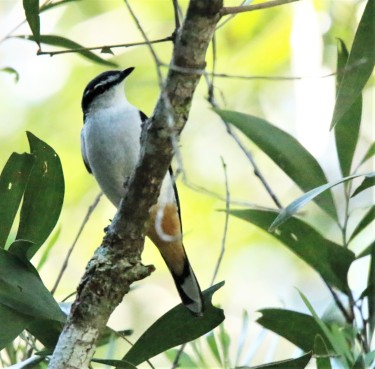 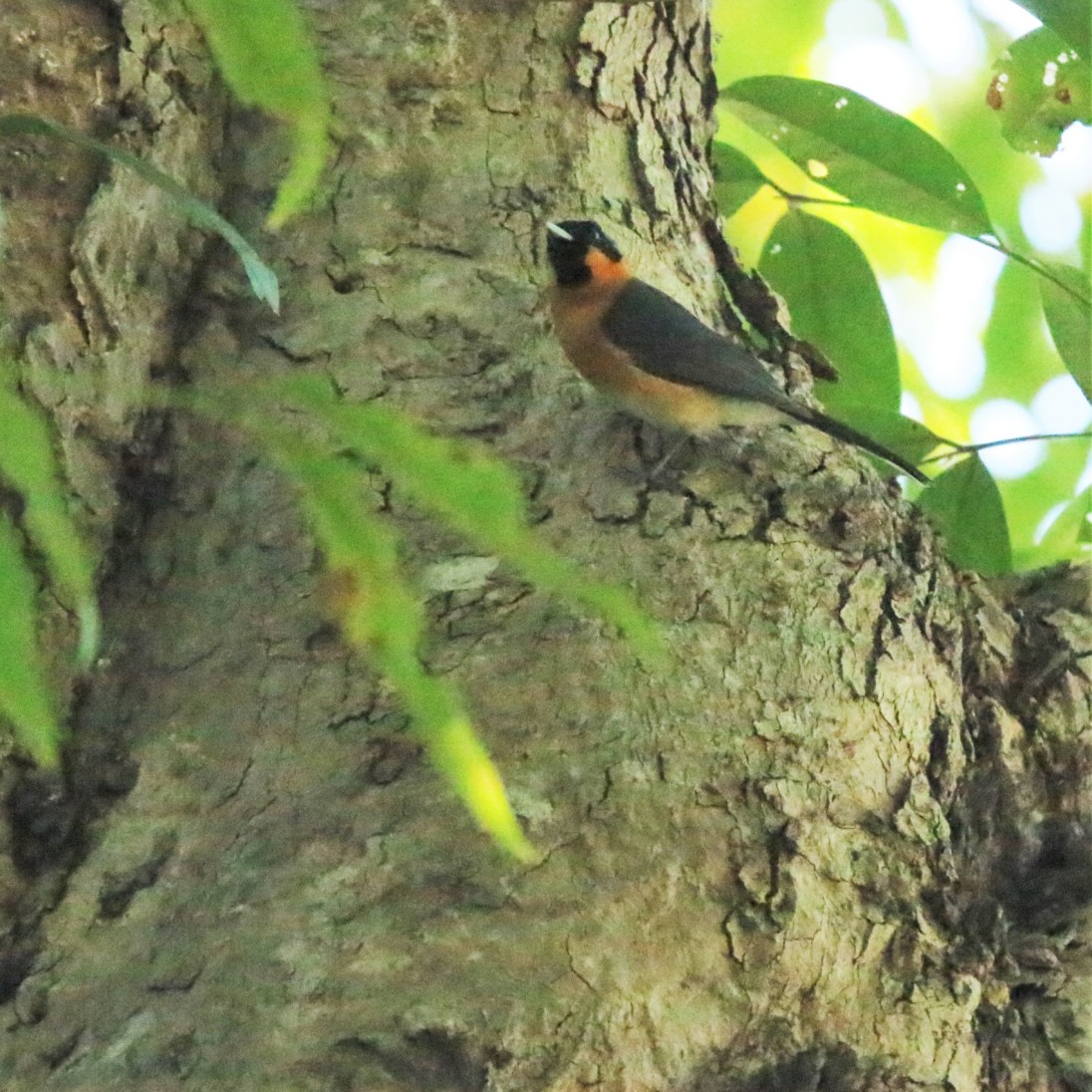 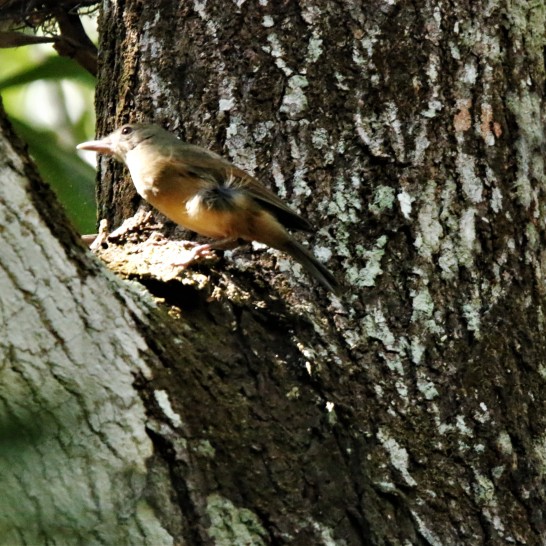 and Grey Whistler (these tend to go in and out of foliage at the same level): 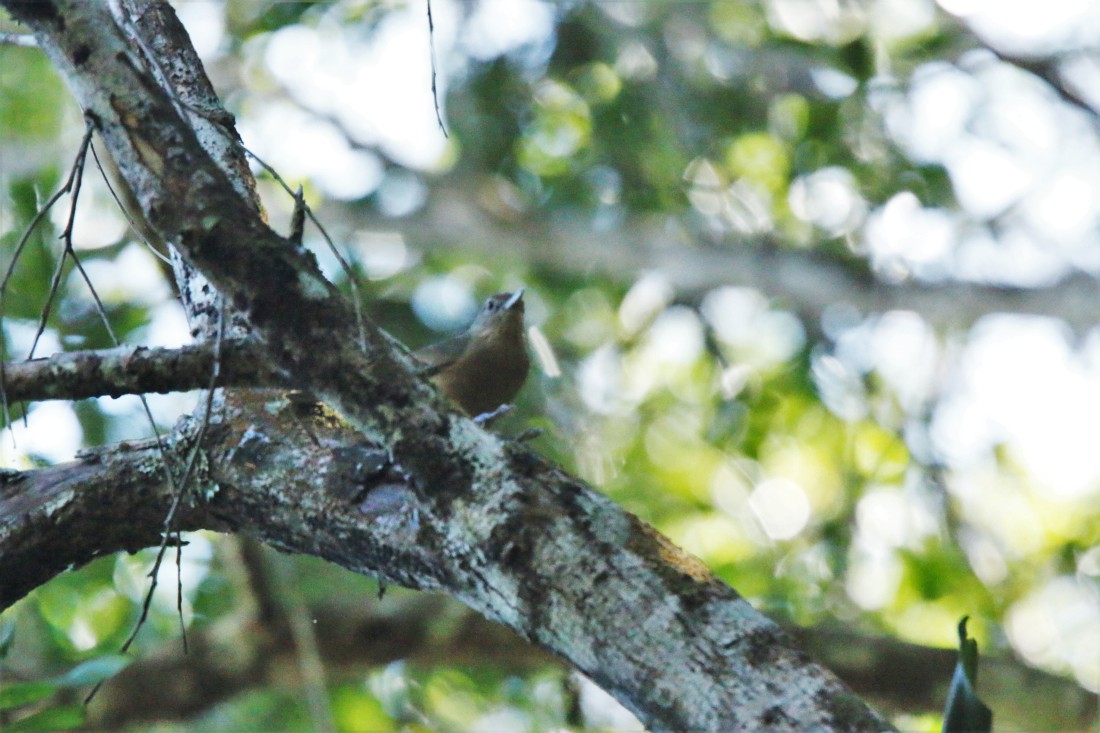 In the distance, we saw a couple of Topknot Pigeons, my first sighting of these rather odd looking birds, even though their range is right down the east coast, but too far away to photograph.

Again my guide demonstrated his outstanding knowledge by stopping on the roadside to find Red-winged Parrots, very very hard to spot even when you knew where they were. 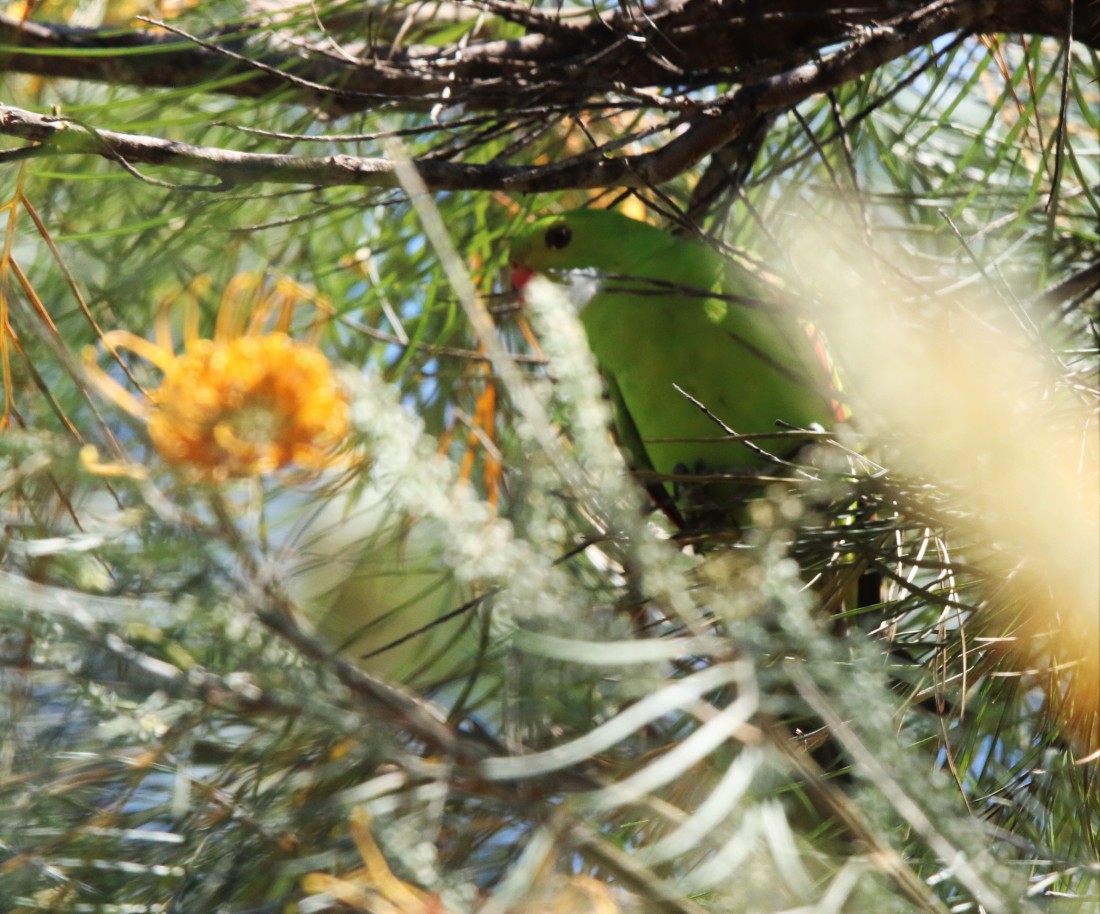 Another rarity, which took some hiking into savannah land, was the Black-throated Finch. Found only in far north Queensland, this one below is an adult race atrophygialis. 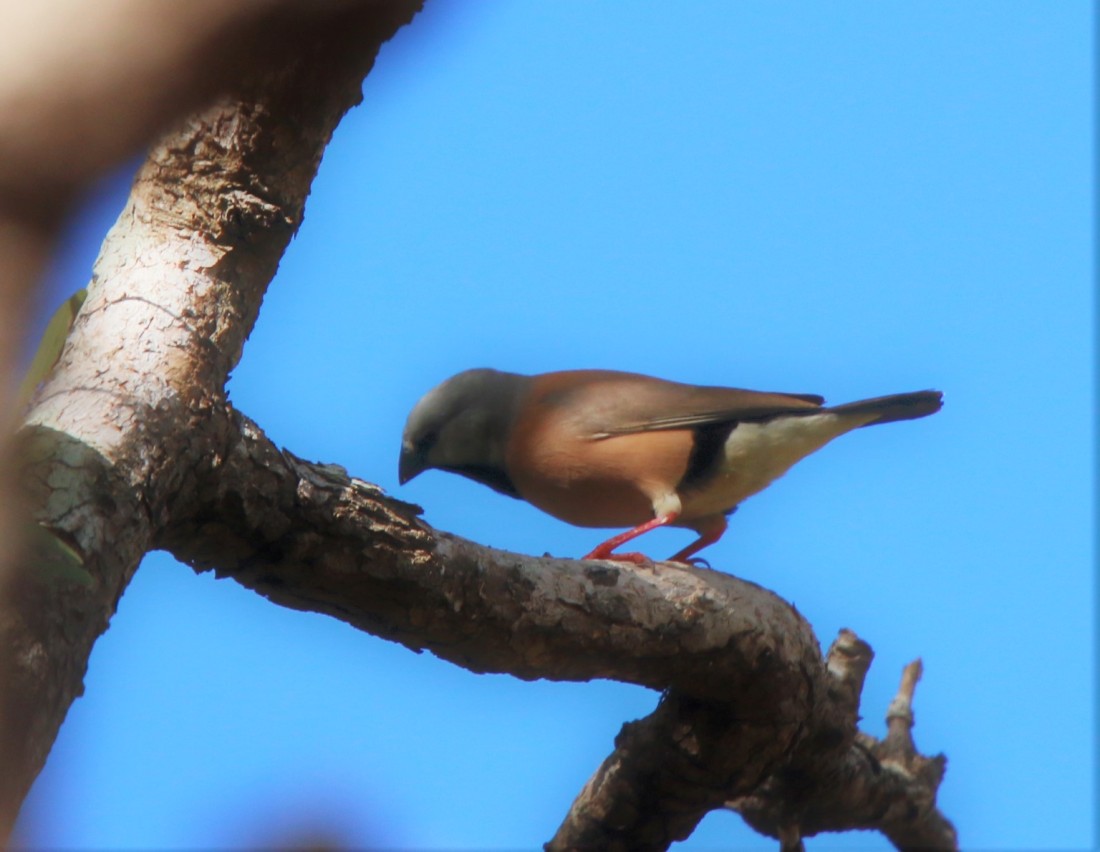 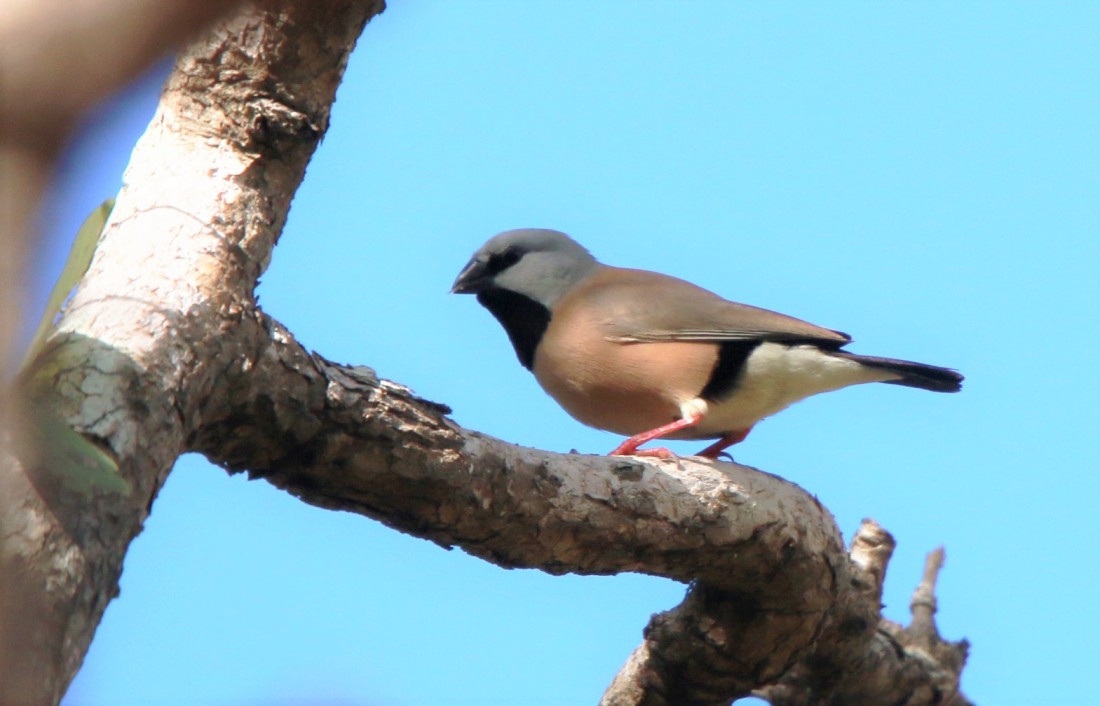 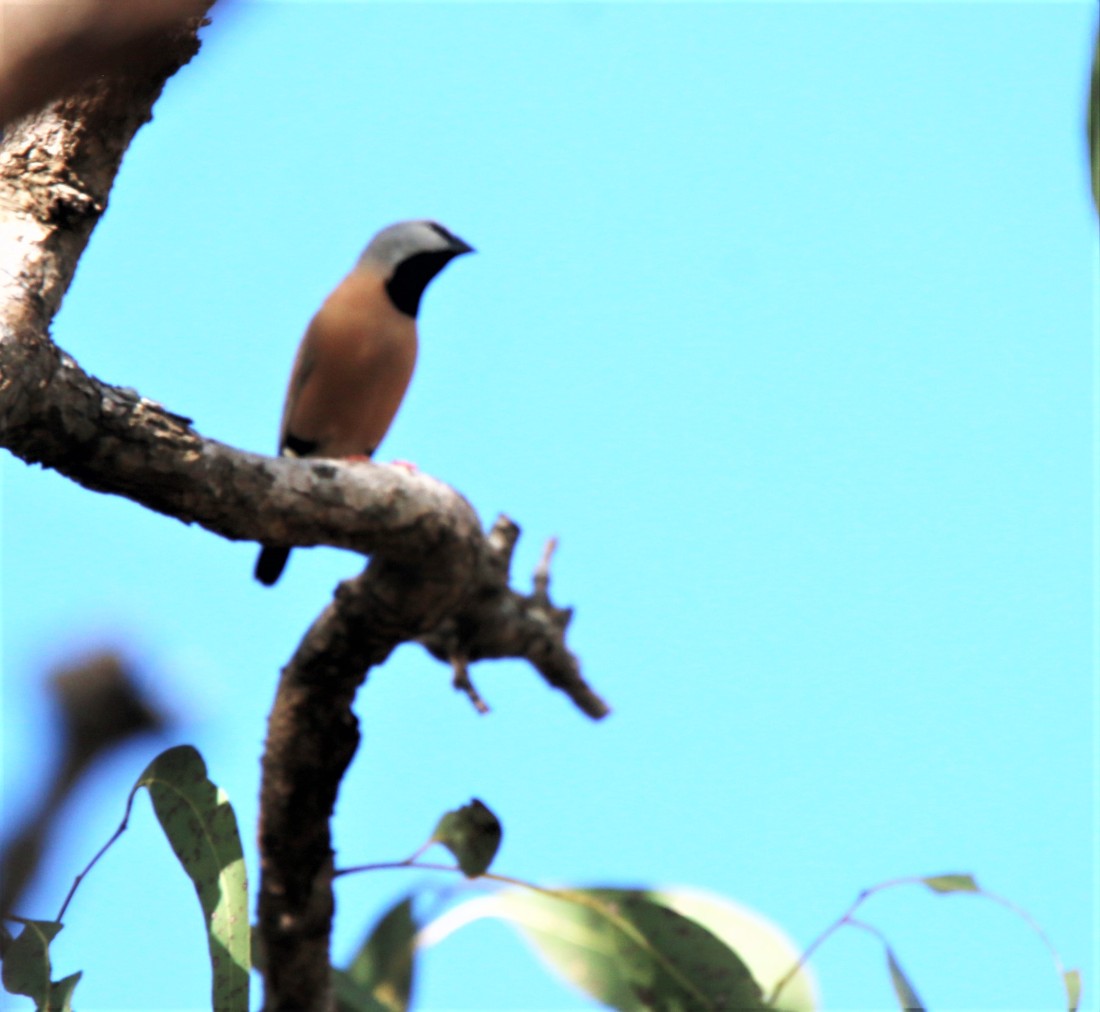 Much more common, and I have seen them in many places, but well camouflaged, were Double-Barred Finches:

My expert guide was most surprised to see the well-named Squatter Pigeon, which spends most of its time solidly down on its heavy legs, sitting on a single electricity wire – we surmised it must have been alarmed by an oblivious pedestrian.

Another fascinating creature is the Orange-footed Scrubfowl, found only on the most northern coastal areas. It makes huge mounds for its nests, a process which involves both partners systematically scratching every leaf, twig and any other debris in a straight line forward and back to the nest. Even more remarkably, typically both are in the same straight line. They leave the scratching site scrupulously clear of any useful mounding material.

The last distant sighting was a Striated Pardalote, in fading light and a bit too far for a decent photo.

On the day we saw 70 different birds species, 33 of them new sightings for me. So, a remarkable day of bird photography,  impossible without the expert guide, and full of learning and growing amazement at the still poorly understood world of birds. 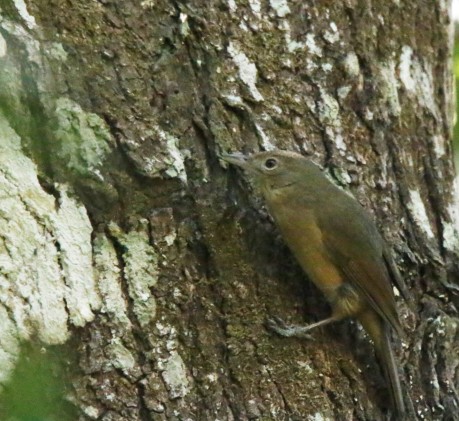