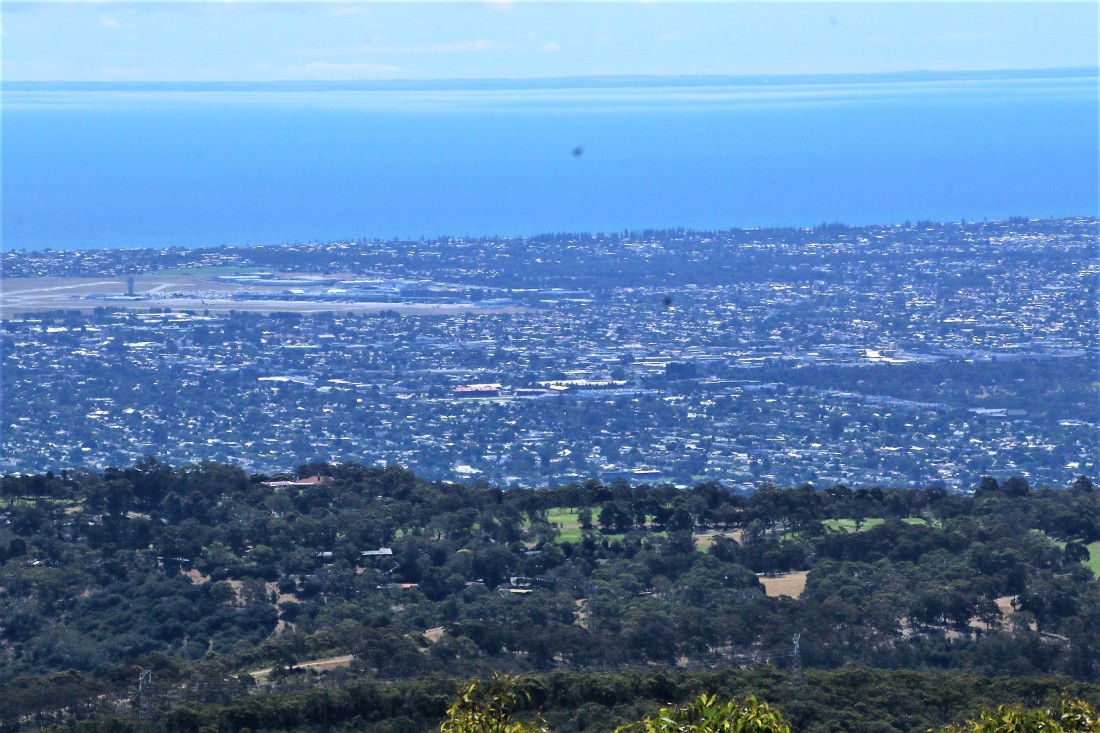 Adelaide from the top of Mount Lofty, so named by Matthew Flinders – presumably, in the opening gambit in Australian humour, because it isn’t . At the time he was circumnavigating Australia in 1802, in the Investigator with his cat Trim.

Flinders had, of course, earlier circumnavigated Van Dieman’s Land with a different cat, one George Bass, in the Norfolk, a boat illegally built on Norfolk Island and hence confiscated when it arrived in Port Jackson, sailed by the naughty but resourceful convicts. Of further note is that Flinders, whilst chewing his fingernails for 6 years under house arrest in Mauritius, came up with the idea of naming as Australia our land girt by sea – oh and the Tasmanian bit too.

Walked most of the way up Mount Lofty which seemed higher the further you went. Nice waterfall at the base in what is for some reason called Waterfall Gully.

There are the remains of a hut beside the track well up in the bush. All that remains are the stone footings. I wondered if it was connected with the rather amazing history of the typically very hard working and successful chinese gold miners in the 1850s, who got sick of being beaten up all the way from Melbourne to Ballarat so they started landing in Adelaide and walking, yes walking, to the diggings – where they got beaten up but at least it wasn’t for the whole trip. It seems no-one knows and the history of the ruins, the owner and the reason for it being called Chinaman’s Hut are still all an unfathomable mystery.   http://www.flinders.edu.au/ehl/fms/archaeology_files/research/HFZCHP/PDF/VoS%20Ch%2014%20Chinamans%20Hut.pdf

At the top, in a rare event, looking at the koala in the gum tree actually did involve more than an empty gum tree.

Another trip was up north to the Adelaide International Bird Sanctuary. Eventually discovering it had two gateways we also discovered that, in the spirit of MMMMM, it isn’t really there. It is an area where lots of shorebirds land during migration, just not when we were there. Some nice coastal walks though and the distance the tide goes out rivals the mussel farm areas of Brittany.  People were right out on the horizon, catching crabs, and presumably sporting a handy tidetime app on their mobile device.

Saw some birds, including a Little Egret (breeding – you can tell by the two long plumes off the back of its head) and a juvenile grey butcher bird, with blood on the top of its bill.  The nest is unusual in that it faces out rather than up.

Like Canberra there are many small urban wetlands to manage polluted storm water. At Oaklands, just south of Glenelg, there were the usual lake birds including some Australasian Grebes, the first below being breeding (the nest is suggestive, but the red at the back of the head gives it away) and the second non-breeding. 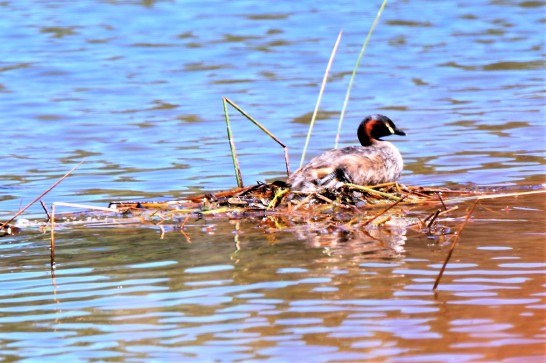